Blind athlete and masseur Marek Moflár: Sport has taught me not to give up

Even though, he can see only on one eye and only one meter ahead, you wouldn’t notice he has some kind of handicap. Former member of national team in tandem cycling, winner of many nationals and winner of European cup Marek Moflár has retired from professional sport after five years so he can achieve his own dream. At the moment, he is a masseur and personal coach, despite that he is still racing triathlons and this year he will compete Ford CHALLENGEPRAGUE a extreme long distance triathlon.

You grew up as a normal kid, you went to regular primary school and did everything what any other kid was doing. Do you think it is important for people with handicap not be overprotected and pitied?

For me, it was essential that I grew up as a normal person in a group with bunch of healthy boys. They taught me not to be scared and to stand up for myself. They gave me confident – I wanted to be member of the group and I had to fight for it. It was great! I grew up with them, played football. You wouldn’t recognize I have some kind of handicap.

You compete in cycling at age of 16 for the first time, two years later you became a member of the national team. How difficult it was to compete at such a young age?

It was easy. I was only loosing at first. How did I start to be winning? I was standing at the starting line next to world champion and all of sudden I told myself – he is not any better than me. He is just like me. At that moment, when I realized that, I started to win. Why not before? Because of my mindset, I was racing only 50 %. I was telling myself, I am a looser, I wasn’t confident. You always need to be aware, why you are at the start-line, why are you doing it, and how much effort you put in it. Sport teaches you not to give up, to overcome obstacles.

You missed the Paralympics in London by a little and then you retired. Why was that?

It was a sign for me. I told myself that I am not supposed to be there. I also realized that I want to study. I wanted to get to know myself better – why do I do sport, how my body works. I studied within sport and now I can help people. I went trough similar issues and I can understand them.

Did you ever think about a comeback?

I was clear about my retirement. I decided to study, work and later then to do long-distance triathlon. Now I can train whenever I want, whatever I want and I do it only for myself. Nobody tells me that I have to. I don’t have to but I want. And that’s the difference.

When did you start with long distance triathlon and with whom do you train?

Jan Strangmüller gave me the passion for Ironman, which he won several times. We train together since January. I was sick for a long time before and I couldn’t do sport for half of a year. Luckily, my body remembers the training I did before and it’s not such a struggle to get back in shape.

What’s the most difficult part of long-distance triathlon?

You need to have the right mindset. It is impossible otherwise. The race is so long that you cannot train for that. I need to know, I am capable of it and keep that on my mind.

How does you preparation differ from athletes without handicap? How do you compete?

Basically, the preparation is the same. I train as much as I can. For example, if a client cancels on me, I cycle on trainer. I am time efficient, if I am free but I need to do some phone calls, I train meanwhile. During a race I obviously need a partner, even though I am trying to be self efficient as much as possible. I don’t like to be dependent on someone else. It’s not a freedom. However, during a race I need someone.

Why did you chose FORD CHALLENGEPRAGUE? Who will be your partner?

There is high competition, the race is popular. We aim high and I think it can be very interesting to watch. The atmosphere of the race is every year better and better so I am really excited. My partner will be Jan Strangmüller. I was supposed to be Tomáš Novotný with whom I competed before. We did Challenge Roth and other Challenge Family races.  However, Tomáš had a serious accident on motorbike some time ago and it will take him time to recover. He lost his leg but we agreed that it won’t stop us and we will compete together again. Imagine, blind with legless! That will be amazing!

What is your goal in Prague?

Well, we won’t to do well (laugh). We set some times we want to achieve, we want to be in front but that’s all I will say. We will do our best.

Besides CHALLENGEPRAGUE  we are planning on CZECHMAN, Pálava race a Doksy race. Afterwards we want to qualify for Ironman Hawaii at Ironman in Italy. All of these race are challenging for me. For example, at Ironman I want to compete with healthy athletes. I think that would be something great for all of us! But no pressure, I don’t really care that much how it all ends, I just want to enjoy it. 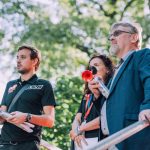 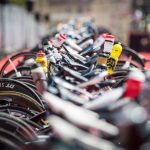 Changes of General Conditions and Rules for ParticipationLatest news, News