Unique medal for every finisher!

Introducing this year’s finisher’s medal. Every athlete who will finish this year Ford Challenge Prague can be looking forward this unique medal.  The medal is unique not only for picturing important Prague monuments, but especially for its shape, which copies the outline of Prague.

The Powder Tower is a dominant feature of Republic Square and Na Příkopě Street. The Gothic Gate has a long history. The original gate, which used to stand at the same place, served as one of the gates of the Old Town fort. After the establishment of the New City, this gate was no more in use and was desolated. Later it was decided, new gate should have been built. Its construction began in the 15th century, but the Old Town lost interest and left it unfinished. Until the mid-18th century it served as a gunpowder depot and that’s how the gate earned it’s name. Today’s appearance was not achieved until the late 19th century. Today the gate is one of the symbols of Prague.

Perhaps the most famous monument in Prague is Charles Bridge. The second oldest bridge in the Czech Republic has been connecting the banks of the Vltava River since 1402. Since the 17th century it has been decorated with 30 Baroque statues and sculptures. Competitors of Ford CHALLENGEPRAGUE can admire the bridge during the swimming course that take place around Střelecký Island and offers spectacular view on the Charles Bridge with the Prague Castle in the background.

In the finish line you can have your name and finish time engraved on the medal. It is necessary to order the service in advance. Order here.

Another significant monument on the Ford CHALLENGEPRAGUE route is the Dancing House on the right bank of the Vltava River at the corner of Rašínovo nábřeží and Jiráskovo náměstí. The building bears its name according to the shape of two corner towers, inspired by the famous interwar dance couple Ginder and Fred.

The last depicted monument is Vyšehrad. Vyšehrad is situated on the right bank of the Vltava River and its towers are unmistakable. There are many legends from the beginning of Czech history connected to Vyšehrad. Many prominent Czech personalities are buried at the Vyšehrad Cemetery. Vyšehrad acquired its present by the turn of the 19th and 20th centuries, when the right riverside of the Vltava was connected with the southern surroundings of the town with a tunnel.

The medal has a shape of a map of the city of Prague. Its outline follows the territory of the capital of the Czech Republic, where Ford CHALLENGEPRAGUE takes place. 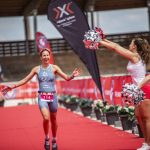 Radka Vodičková-Kahlfeldt: I am proud that this huge event is held in my homeland!Latest news, News 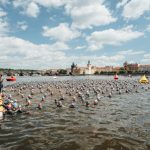 Two months to the start of triathlon’s holidayLatest news, News